K9 Squads are also known as ‘Canine Squads’, and as the term suggests, this form of security involves extensive deployment of dogs as security personnel. Dog breeds such as German Shepherds, Rottweilers, Cocker Spaniels, Labradors, Malinois and Springer Spaniels are widely used by the security services across the world. K9 Dogs are essentially squads used for general security, monitoring public events, detection of narcotics, firearms/explosives detection and detecting human remains at terror sites (for instance).

WHY CANINES (K9) FOR SECURITY?

“Dogs are superior to man, and in that, they have a fair share of man's intelligence but none of his meanness," said George Bernard Shaw. As research suggests, dogs are gifted with a high sense of smell, hearing, speed, stamina, ferocity and faithfulness; and they have been exploited by human beings to their best of advantage. The canines are deployed across the globe for the same qualities. According to recent reports, the chief minister of Gujarat met with Israeli officials to import Belgium Shepherds, since this breed of dogs is known 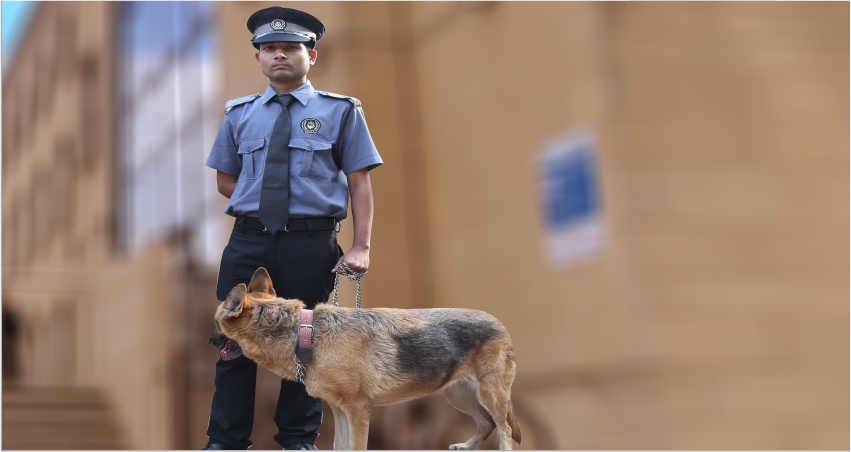 to be apt at mob handling. “These dogs of the Belgium Shepherd breed will also be used for mob control In Israel. These dogs are trained not to attack a suspect but to hold them by their hands or feet. This is always better than to use bullets at a mob or a crowd,” the report said.

As per standard practice, K9 Squads are used at public events (mainly in political rallies), meetings between important personnel, detection of arms and ammunition, terror sites monitoring and now increasingly for general security as well. The National Security Guard (NSG), Border Security Force (BSF), Indian Customs & Central Excise, CRPF, and the State Police Departments, are some of the Government institutions that heavily deploy K9 Squads. BSF also deploys the imported Belgium Shepherds for mob control and as a matter of fact, are involved in providing squad training to private security agencies.

At present, there are challenges in importing the requisite dog breeds, managing their upkeeps, and their training for public security. Considered as a premium security service, K9 squads are frequently operated by locally managed private security agencies.

At SISPL we try to provide you with the best-in-class security with the help of our trained K9 squads. We have catered to a large number of clients and are dedicated towards providing high-quality community security.

Not just for the sake of public security, but K9 Squads are also used in overseeing wildlife activities such as prevention of poaching, tracking illegal trade in wildlife, and other illegal activities. As per reports, the requirement of sniffer dogs in wildlife areas has gone up due to the high prevalence of illegal trade activity in the wildlife regions in India. Traffic, the Wildlife Crime Detection Wing of WWF, India has taken up the task of training the canines in India for this purpose.

As a private security service provider, we at SISPL seek to match up with the standards of security provided by both the state and the international bodies.